It’s Not That a Third Party Can’t Win 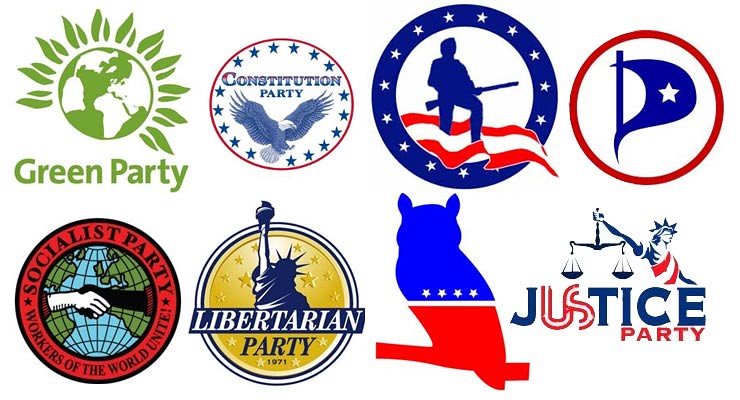 It’s not that a third-party candidate can’t win the general election. One might even argue that America is begging for more than the standard two options that many say we have been “stuck” with. So a successful third-party run is not far-fetched.

In fact, with every Presidential election cycle, there comes the inevitable moment where a segment of the population begins to clamor for a third-party candidate. In 2016, we saw Gary Johnson try his hand at breaking the two-party mold, along with Jill Stein who did not fare as well. In 2020, Jo Jorgensen has been the name most mentioned as a third party option. In 1992 and 1996, Ross Perot was marginally successful in his third-party bids. He is the last third-party candidate to date to secure at least 5% of the popular vote. A third party candidate has not secured an electoral vote since George Wallace in 1968.

So what is holding the third-party candidates back? If the country wants more options, why do these candidates gain so little traction?

There are many reasons the two-party system has been so difficult to break. But in fact, the major reasons are relatively straight forward.

The last President whose highest disapproval rating was lower than 50% was President Ford, and of the last 13 Presidents, only 3 have had their highest disapproval below 50%. What this means is that with the vast majority of recently elected Presidents, at least half of the country has, at some point, actively disapproved of their performance. When this happens, it is safe to assume that a large percentage of the population is voting against a candidate rather than for another candidate.

For example, George W. Bush had his highest disapproval rating as he left office, and it stood at 71%. So a large portion of the electorate was ready for anyone other than Bush. As he represented the Republican party, it would likely be safe to assume that a large number of voters were skeptical of the party’s ability to govern.

Similarly, Donald Trump’s disapproval currently stands at 60% as we approach this year’s election. In both cases, Democrats were/are likely voting to remove a specific President rather than install someone they like simply for their ideals. And because the goal is not to elect someone they really like, but rather to ensure that a highly disliked President is removed, the room to risk a vote on a third-party candidate is extremely thin. Voters are keenly aware that risking a vote for a third party could actually aid in the reelection of a party or candidate they are highly dissatisfied with.

And this fear is well-founded. Since 1832, only 14 third-party candidates in 12 separate elections have managed to capture at least 1 electoral vote or 5% of the popular vote. Theodore Roosevelt ran the most successful third party campaign in 1912, capturing 88 electoral votes and about 28% of the total vote. That election is the poster-child for why third party candidates do not experience much success.

After his own Presidency from 1901-1908, Roosevelt was succeeded by William Howard Taft, a member of his own party. Roosevelt did not agree with Taft’s overall performance in Taft’s first term, so in 1912, Roosevelt tried to beat Taft for the Republican party nomination. Taft won the primary, however, and so Roosevelt ran as a third-party candidate. Taft and Roosevelt split Republican votes in the general election, allowing Woodrow Wilson to win the Presidency.

Perhaps the largest thing standing against the success of a third-party candidate is the third-parties themselves.

Very few parties have anything close to a national infrastructure. The Libertarian Party has been the most successful recently. But nationwide, they hold just 168 total offices. Similarly, the Green Party only holds 143 positions nationwide. Neither party has made much headway in growing their footprint nationally. Their platforms do not garner them support in smaller municipalities. And with such emphasis on the ability of a Presidential candidate to be able to fundraise, advertise and travel in order to be viable in a general election, it is nearly impossible for smaller parties to compete with the big two.

And a lot of this has to do with the current political issues. The Presidential election stands on its own in the way the public perceives it. The candidates in competition support two specific platforms, the Democratic platform, and the Republican platform. These are the guiding principles for these parties to operate on. And in recent years, the stances on the issues they hold have become binary.

Republicans want to spend large portions of the budget, whereas Democrats are generally opposed.

Democrats are pro-choice. Republicans are pro-life.

Democrats are generally for nationalized programs, whereas Republicans are for privatization.

And so on, so forth. These are extremely general descriptions of some of the party stances. The main thing to think about here is, within this context, is whether there is the room from a policy standpoint for a third-party not only to differentiate itself but also establish itself.

Essentially there are two options: play the middle, or play the extremes. The extremes simply don’t work. This is partly because the two major parties are drifting toward what we can call “tolerable extremes.” Democrats are leaning more heavily into a progressive agenda that emphasizes community action, large social programs and a focus on humanity and Republicans are drifting toward a highly conservative, pro-religion agenda that emphasizes individuality and reaffirms the capitalist model. So all that exists on the edge is a complete systemic change to a new system like socialism, communism, or something entirely different.

And in a country that is staunchly divided, the idea of a “compromise party”,” while it may be logical, could never garner enough support from either side because so many issues that would need to be compromised on are binaries. It would need to take on a “live and let live” mantra in a country with many people intent on imposing the views of their side on the other.

So in summary, no current third-party has the infrastructure to compete on a national level, other than to chip away votes from one of the major parties. From a platform perspective, there isn’t a ton of room to establish a lane for a clearly defined third party that can differentiate itself from the major two, especially for the long-haul. And on top of these concerns, voters are strategists who understand a third-party vote at this point in time is risky, a throw-away, or both.

So what will it take for a third-party to gain traction, especially in a Presidential race?

I think 2016 was the prime moment for it to happen. If a third-party can’t establish itself in an election with two of the most unpopular candidates in history, I don’t know when they will be able to. But part of the issue with the third-parties is that their candidates, even those with experience, tend to be laughable. In attempting to present themselves as an alternative, they become caricatures of what a real candidate looks like. Everyone knows they are the third party candidate.

If in 2016, a sensible, moderate candidate with political experience had run, we may have seen something historic. If someone like Mitt Romney or John Kasich had run third-party, or even as Independents, they may have captured enough from either side to win. Democrats were not high on Hillary, especially the Bernie crowd, many of whom actually voted for Trump. So in some regard, there were those on the left willing to vote for anyone but Hillary. Donald Trump was despised by many Republicans and in contrast to Trump’s unpolished and often vulgar performances, either would have appeared to be ideal statesmen.

And they would have run as such. As lifelong Republicans, they would not be pushing some alternate platform. They would simply be running as another option. And I think that is the kind of situation we will see when a third-party candidate breaks through; a candidate who runs the middle with dignity and grace, and likely an element of charm. Once the two parties drift so far apart that the center seems appealing to the masses, a third-party run could probably result in a third-party or Independent Presidency.

But until then, and certainly in 2020, our choices remain the Democrat and the Republican. The contextual boundaries they occupy are within the acceptable boundaries of the electorate. There is a finite amount of space there, and any third-party that hopes to break through will have to carve away real-estate from the other two.

America is in turmoil. We could see a third-party win in 2024, or never. There are so many variables. But if the right person, with the right message and the right demeanor steps into the scene, I can assure you, Americans will cast votes in their favor.