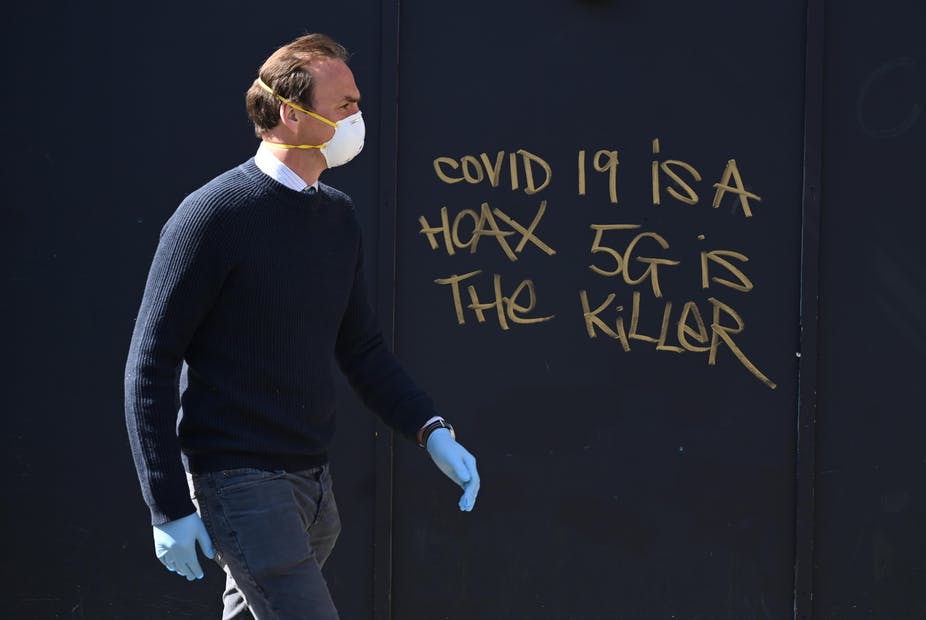 To the COVID conspiracy theorists:

It requires enough factual evidence to create a feasible hypothesis that said conspiracy could truly be happening.

It requires a motive for that conspiracy to exist. Someone needs to benefit from said conspiracy.

And in many cases, it requires, or at least benefits from, an apparent lack of definitive information in regard to whatever “truth” is being questioned.

Let’s take something like government coverup of UFOs, for example.

In contemporary times, we have incidents like Roswell, the Arizona Lights, etc. to further back up these claims, and now we also have a ton of cell phone videos.

So one might argue that plenty of evidence exists that UFOs exist.

So why would the government cover this up? What is their motive?

Well, UFOs, or even contact with extraterrestrials could mean military advantages for the nations with that knowledge. There is also the fear that the validation of such claims could undercut many world religions by proving the existence of other species on other worlds. Not to mention the simple fear that such a revelation could stir up world-wide.

And further, the coverup stories just aren’t that good. Weather balloons? Planes? We know what planes look like. We know what a weather balloon is. We aren’t dumb. We know it’s either aliens or some type of top secret military stuff. And we accept that.

See. A solid conspiracy theory. Checks all the boxes.

It seems there is a contingent of Americans who believes that the entire COVID-19 pandemic is a conspiracy. And I say Americans, because the rest of the world has reacted swiftly and definitively to beat this virus. But in America, home of conspiracies, results have not been so great.

Conspiracies on COVID have ranged from the virus being developed in a lab, to a Democratic ploy to overthrow Donald Trump and further, total and complete fabrication of statistics in regard to the number of cases, fatality rate, and deaths.

Now, I am someone who can get behind a good conspiracy theory, if for no other reason than entertainment. But with COVID, even the thought this could be a conspiracy is laughable, but worse, that kind of thinking has real-world negative effects, namely, the deaths of thousands of Americans.

Let’s get to debunking.

COVID first reared its ugly head in Wuhan, China in December of 2019. By February (maybe earlier) it had made its way to the US and by March, a national emergency had been declared by President Trump and many states began shutting down. Since, the following points have been raised in an attempt to downplay or dismiss the pandemic entirely:

There were some reports or speculation that the virus may have been lab-created. However, those claims were quickly debunked. Here is a rundown on how it was debunked from Live Science. Long story short, there is past evidence that virus spreads to humans from bats and that this is a new mutation that has spread to humans.

How serious (or not serious) the virus is seems to be up to personal opinion at this point. Experts all say this pandemic is the worst health crisis since the Spanish Flu a century ago. But expert opinion seems to matter less and less as personal subjectivity on social media platforms enables echo chambers of false information to form.

One of the biggest contributors to the uncertainty that opens these loopholes for speculation is that we are experiencing, in real time, the evolution of a planet’s response to a brand new virus. With any new situation, things can change quickly. New information breeds new methods of dealing with problems, and COVID-19 is no exception.

Anti-maskers will point to early expert recommendations from March that there was no need to wear a mask. That advice came as there was a national shortage in protective equipment in hospitals, and we still had no real idea how the virus spread. Initial advice was to simply wash your hands, and not to touch your face. Airborne transmission wasn’t confirmed for some time.

Once the PPE shortage was addressed, and airborne transmission confirmed, new advice was rendered informing us to wear masks. As stated before, new information yields new methods. To channel the Vulcans, it would be logical to adjust our methods based on this new information. And this is where the disconnect occurred. Most Americans understood that the science had changed and new measures were required to remain safe. But the seeds of skepticism were sewn on social media and certain news networks, and masks were somehow seen as a “violation of rights,” or “ineffective.” It didn’t help that the administration refused to propose or enforce any nationwide counter-measures to the virus.

Likewise, there have been situations where some COVID numbers were misreported. To put it in context, there have only been a handful of these cases, and every county across the nation is reporting in some regard. Some sites reported more tests administered than were actually given, some death numbers were over-reported or under-reported, and the same can be said for total cases. However, these small abnormalities are corrected and do not change the greater numbers, given their small sample sizes. I find that the Johns Hopkins site is extremely reliable for statistics. So if you want information from a “non-media” source, there’s one for you.

Those small cases of misreporting, just like the original mask advice, opened the door for conspiracy theorists to plant their flags and scream foul.

The final point is more motive based, than anything else.

Somehow, it has become a common conspiracy theorist talking point that the virus is a hoax/scam/invention of the Democratic party in an effort to undermine Donald Trump. There is little evidence to suggest this as the virus has effected every state (in fact, the world) and both Republican and Democratic state governments have taken strict (and also not so strict) measures to combat this pandemic.

Motive, however, is another story. I’ll start from the top.

The virus isn’t real. Who benefits from this? Let’s say the virus, in fact, is not real. It’s totally made up. We are just dealing with an advanced cold, all the deaths have been wrongfully attributed and case numbers have all been falsified. Who benefits?

Governments have gone into debt to implement measures to help distancing, support the unemployed and support businesses. So governments don’t benefit.

Businesses have been forced to close, losing months of revenue. Businesses do not benefit.

Workers have been forced to change their habits and ways of communication and over 10% of the workforce is unemployed, so workers don’t benefit.

All nations across the world have been hit by this virus, so no foreign entities benefit.

There are two beneficiaries as it stands, and they are the healthcare industry and Wall St. Though both struggled early, the healthcare industry is now raking in profits and Wall St. has somehow recovered, despite the closure of businesses across the country and a worse economic downturn than we experienced in 2008. If I were looking for a conspiracy, I’d start there.

The virus was manufactured in a Chinese Lab. Ok, I am stumped here. China would obviously benefit from this one. Except…why plant the virus in your own nation and then be forced to lockdown? Foreign workers were forced out of China, their economy was hit and they suffered many deaths. I suppose you can say it escaped the lab accidentally, but that sounds more like the plot of a Bond movie than reality.

The virus is not as serious as state and local governments imply. Ok so you are a small state. The virus comes knocking, and you shut the state down. Businesses close and over time, the virus transmission decreases, but revenue is lost and unemployment skyrockets. Or conversely, you are a state that chose to remain open. All of those states saw such rapid rise in transmission that they saw thousands of deaths as a result and were forced to implement shutdown measures anyway. Further, Donald Trump himself declared a national emergency on the issue, lending the entire pandemic a degree of Trump credibility. So why would any government at any level gain anything by making more of the virus than it actually is? Most of these people are elected officials whose political careers are at least somewhat going to be defined by their response to this crisis. So if the virus wasn’t a big deal, why risk personal career damage by exaggerating a situation and costing people their livelihoods? It just doesn’t make sense.

Virus Data was fabricated. Fabrication can work both ways – to diminish the severity of the crisis, or to exaggerate it. One would only exaggerate the situation if it were beneficial to them. For instance, if they locked things way down, but then no one died and they needed to cover their tracks to make things look worse than they were to justify their actions. That’d be one reason. And one might diminish the virus if they didn’t want to deal with the economic or political fallout for taking responsible measures to curb the spread. Motive here can vary greatly, but neither scenario has proven out. States that locked down generally see limited spread, states that didn’t saw spikes. Then all the states, regardless of situation, reacted to that information, primarily in the month of June. Given that all states have reacted in some manner, fabrication seems unlikely.

Democrats created or prolonged COVID to undermine President Trump. This is actually the most ridiculous claim. You may have though “the virus isn’t real was,” but that is incorrect. And the reason is simple. COVID-19 was a softball that was thrown at the Trump administration. Despite all of Trump’s flaws and misdeeds, if the Trump administration had competently stepped up to the plate, they could have easily brought many Americans on board, especially going into an election cycle.

Imagine a world where, in February, Trump not only stopped travel from China, but shut down ALL unnecessary travel nationwide. Then imagine that he mandated a nationwide stay-at-home order. Upon seeing the PPE shortage, he immediately invoked the Defense Production Act and mandated US manufactures produce PPE and ventilators to quickly account for the shortages. And imagine further, that they had competently overseen a national pipeline for the movement of essential equipment to needed areas, instead of leaving states to compete with one another in a capitalistic fight-to-the-death in a highest-bidder-takes-all scenation.

Donald Trump had more to gain from this crisis than he had to lose. By a longshot. The botching of the pandemic, and the resulting hit in the polls, was a self-inflicted wound. When COVID hit, Democrats would have been right to be scared for their political lives, given that if Trump succeeded in a smooth and quick recovery, it could mean the 2020 election.

So as a fellow American who occasionally indulges in a good conspiracy theory, I am asking COVID conspiracy theorists to do one simple thing: ask all the questions. Because I truly believe that if you are asking all the right questions, and using strong critical thinking to analyze outcomes, there is no logical way you can arrive at any of the above narratives. Healthy skepticism is one thing. But baseless fanaticism is another.