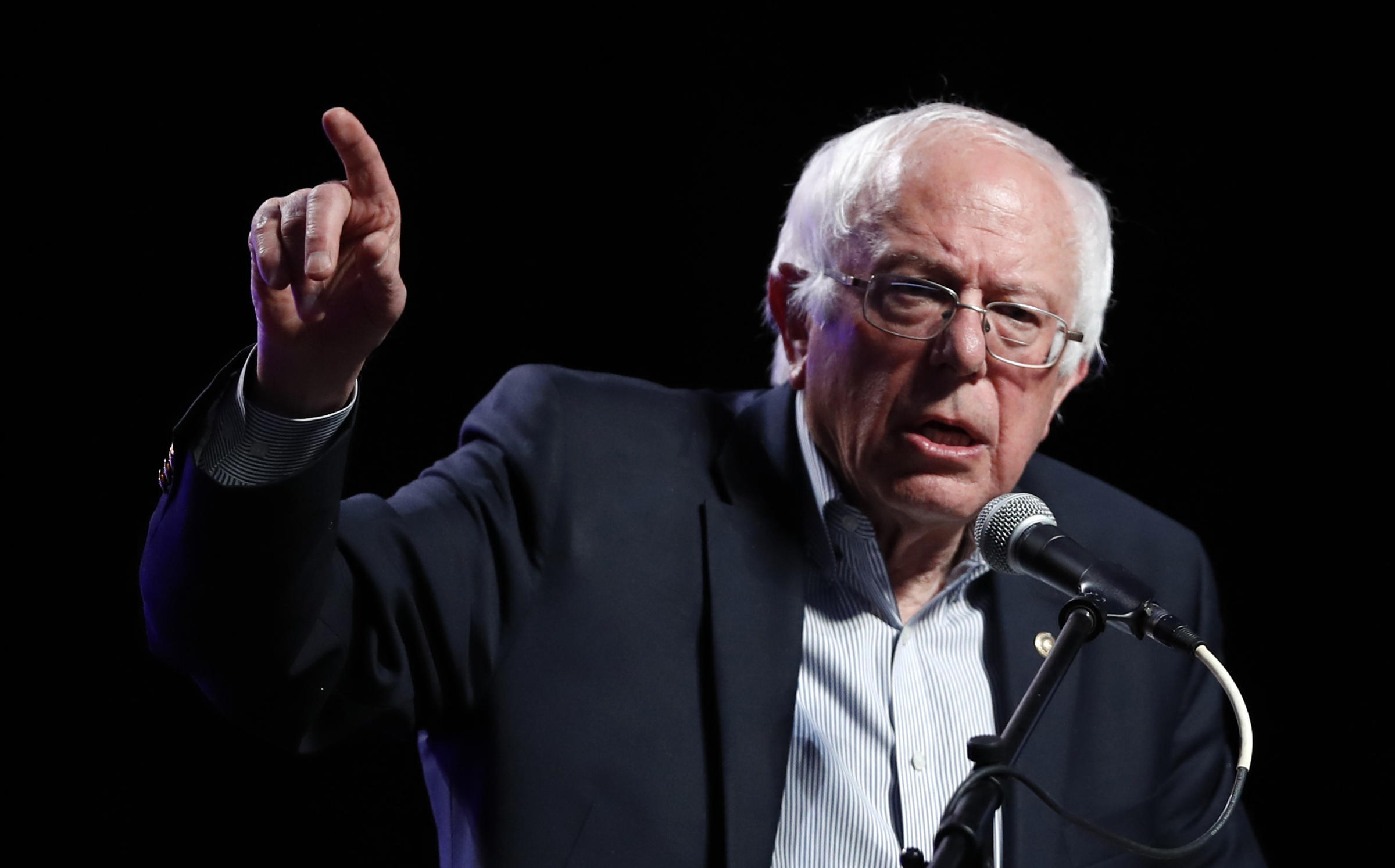 Here we are, the first caucus day. Candidates have been on the trail for nearly a year, and today will yield the first results in the Democratic primary race.

I’ve been hesitant to write up much on the candidates to this point – mainly because I find all of them likable to a degree, right down to Andrew Yang and Tom Steyer.

So due in large part to my own indecision, I will continue to hold off on my personal rundown on candidates. But today, something jumped out at me. It’s something that has been in the back of my mind since 2016, but it wasn’t until just a few moments ago that I could piece together this weird feeling I have surrounding Bernie Sanders.

As early as I was able to politically identify, I have been a Democratic Socialist. I believe the power of community is the future, and that when everyone contributes to common needs, we can all succeed. I have always had issues with privatization, and have always railed against the idea that corporations can be considered people in the eyes of the law. The moment I learned this fact, I took it to mean that this was a loophole for people who benefited from skirting the law to shirk accountability. As I get older, this becomes more apparent. The older I get, the more liberal I seem to become.

So why is it that I have so much trouble putting faith in Bernie? In 2016, I was a Hillary fan early on. I had the “Ready for Hillary” bumper sticker in 2015. At the time, there didn’t seem to be any real challenger. And then I heard Bernie Sanders. He aligned with me. He wasn’t afraid to use the word “socialism.” He was a lifelong Independent, and better yet, President Obama had laid a strong foundation for someone with Bernie’s ideas to build upon. I was hooked.

He began winning primaries, and it seemed like Hillary would again be ousted by a surprise candidate. But as the summer wore on, something started to change for me, and I think it was in the debates. I just wasn’t hearing anything new. Yes, universal healthcare, I get it. Yes, he voted against the war in Iraq, I get it. Yes, unions, I get it. But when pressed, the details just didn’t seem to be there. Cost of healthcare seemed elusive, clear foreign policy objectives were missing. The one-liners became more and more hollow with each debate, all while Hillary Clinton was able to spell out specific plans backed by statistics or studies. And somehow, all of this just seemed to decrease Bernie’s credibility, at least for me.

We know how 2016 ended, that is to say, not well. Could Bernie have beat Trump? Maybe. I doubt Bernie would have messed up the blue wall the way Hillary managed to, and maybe that would have been enough. But we can’t change the past, all we can do is look ahead.

So here we are, 2020. We have a diverse and, in my opinion, extremely strong field of candidates. Bernie is back, but Elizabeth Warren now joins him on the progressive side of the stage. A young and charismatic Mayor Pete holds the center with Amy Klobuchar. Joe Biden is…being Joe Biden, and Mike Bloomberg is trying to show everyone how money can buy you the office. I’ll also add that I have enjoyed listening to Andrew Yang and Tom Steyer. While I don’t support them, they bring a lot to the conversation.

I thought Bernie or Elizabeth Warren would easily become my personal favorites. But they didn’t…at least not quickly. And that brings me to this point.

I don’t think I can trust Bernie Sanders. I am going to use one small anecdote as evidence.

Bernie’s whole thing is Healthcare. I know it, you know it, Trump supporters know it, the world knows it. He has other good ideas, but Healthcare is his identity.

Posted below are the healthcare plans posted to each of the Iowa front runner’s webpages.

Elizabeth Warren’s page is the most impressive. It’s not up for debate. Right away we are given two letters detailing cost of Medicare for All. The info in the subsequent text contains stat after stat after stat. This is a candidate who not only has a vision, but clearly has the ability to research and then present a coherent and persuasive argument using not only personal passion, but facts, both as they relate to families as well as the cost to government.

Mayor Pete’s is ok. We get a chart! We even get a few numbers. And then we are presented with a list of FAQ’s and Pete’s answers. It’s effective, but it’s a surface level take. Medicare for All Who Want It. One thing he does address is whether middle-class taxes will rise. “No,” is his answer.

Biden’s page, to my great surprise, was the second most comprehensive. Again, we have stats and arguments to bolster his case. Now I support Medicare for All, but Biden lays out a history of the ACA and throws out a lot of information. There will be a tax credit for the middle class, he will make sure drug prices can be negotiated, he will ensure healthcare is a right, he will stop surprise billing, etc. Agree or not with his policy position, it’s a really good write-up.

And finally, Bernie. Mr. Healthcare himself! We open with some summary points about his plan: Medicare for all, no premiums or deductibles, and no more letting those drug companies rip you off! Great! What else?

Nothing else. His summary points are four bullets. His “Details” section is roughly twice that size, and it simply reiterates his summary with some fluff thrown in for…I’m not sure.

I expected a detailed plan, from his first day in office onward, on how this idea would become reality. But like his debate performances, the details are not there for us. Meanwhile, Elizabeth Warren not only champions a similar healthcare stance, but has a plan and the stats to back it up. It is a major concern to me that Mayor Pete seems to be able to give more information on a healthcare plan than Bernie can.

Ideas are great. Idealism is great. I love setting the bar high and skipping all the stepping stones between where we are and where we should be. But ideas won’t make that happen alone. To make huge jumps, we need excellent plans. We need to convince the majority of this nation that Universal Healthcare is beneficial to all. But for that to happen, whatever is put in place has to WORK.

Now I will concede that more is not always better. But my instinct tells me that a candidate whose team puts together comprehensive research and planning on an issue that they can present to voters before Iowa is probably the candidate best prepared to pass a bill on that issue on day one. And unfortunately for Bernie, he’s currently fourth out of four in that ranking.

Something we don’t talk about a lot is what is at stake with a Bernie Sanders or Elizabeth Warren should they win a general election. If elected, it would be America putting socialism on trial. We would have chosen to put a new ideology in office, but in doing so, the leash would be short, and the standard of success would be unfairly high. But what if Bernie passes a Medicare for All, but it’s half baked? Because “almost” won’t be good enough – the ACA showed that.

It is a little baffling to me how Bernie holds an edge over Warren. Much like Clinton, she seems sharper, better prepared, more savvy, more ready to govern. But despite that, Sanders is ahead of her in nearly every poll, even though he has said nothing new in the last four years, and even though he doesn’t seem to be able to be able to spell out his plan with any level of detail.

I will hope, as I always have, that Sanders has all of this information elsewhere, laid out in painstaking detail, with all potential criticisms addressed and every dollar needed accounted for. I love his passion and his enthusiasm and I will 1000% support him if he becomes the Democratic nominee. But I hope between now and then he can show us all more, and that he can take a few minutes to put that passion into planning so when the Trump attacks come flying, he will have both passion and statistics to back him up.