The Double Standard of Trump and Pelosi 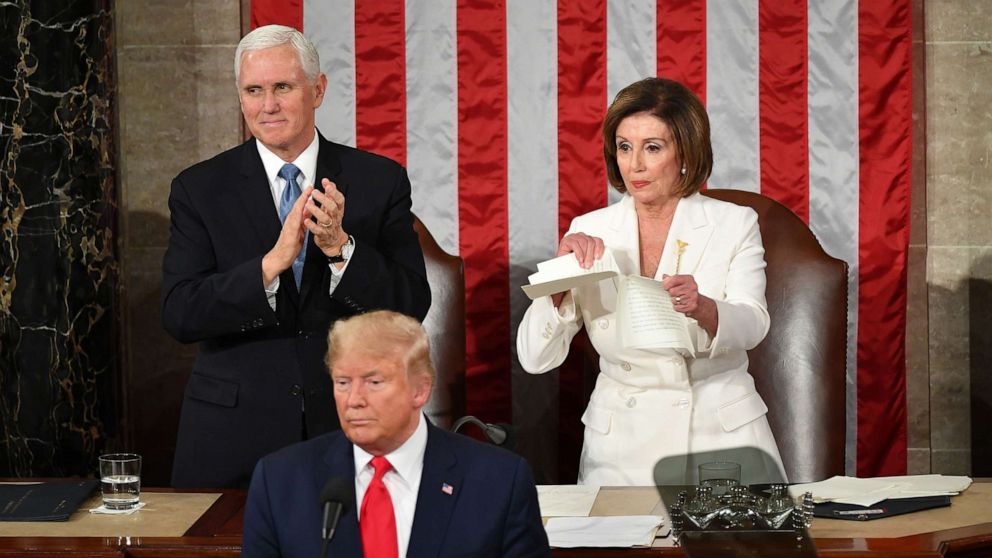 Last night’s State of the Union events are a perfect microcosm for America over the last few years. In case you missed it, Donald Trump snubbed Nancy Pelosi’s attempt to shake his hand at the start of the event. At the end of the address, Pelosi tore up a paper copy of the speech. Trump never turned around to acknowledge her at the conclusion (or the Vice President, for that matter).

All in all, it makes for some good entertainment. The fiery Pelosi taking another shot at the impeached President in what could be his last State of the Union. The President denying his adversary a civil greeting. In a vacuum, you could chalk it all up to gamesmanship. But we don’t live in a vacuum.

What has become troublesome is the way these events are consumed by the public. This is in part due to the media and the way in which these stories are reported. But at the end of the day, it is up to each individual American to draw their own conclusions and form their own opinions, hopefully based on fact, though facts are subjective these days.

We live in a reality of false equivalencies.

In 2012, Mitt Romney was running against President Obama in the election. In trying to explain gender equity, he stated that he had “binders full of women” whom he had worked with or employed.

That statement cost him the election. That’s all it took. Objectify women in a way that makes them a statistic, and Americans will kick you to the curb.

Nancy Pelosi ripped up a few pieces of paper.

The right-wing spin machine equated this to dishonoring a military family and a Tuskegee airman who were in the audience.

Never mind that Trump villified immigrants in his speech. Never mind that Trump said he had an “ironclad” promise with the American people to protect pre-existing conditions despite continued legal and legislative attempts to repeal the very laws that offer those protections. Never mind that he cheaped the Presidential Medal of Freedom by bestowing it upon a far-right wing talk show host who has a history of demeaning women and using racist rhetoric. She tore up a piece of paper, and that means she hates America.

The Trump era has become dangerous not because of the President himself, but because of the supporters who seem to have traded any level of decency and integrity for the artificial feeling of “winning.”

Romney had binders full of women. Republicans turned on him.

And his supporters are unwavering. For what? A Tax break? What would cause a portion of Americans to sell their souls and abandon their integrity? What benefit is so great that it justifies electing a self-serving, racist womanizer?

Nancy Pelosi tore up some paper. She hates America.

Mitt Romney had binder full of women. He lost an election by a landslide.

Donald Trump has been consistently dishonest and divisive and thrown any inkling of decency, empathy or integrity to the wind.

And his support solidifies. This is the America we live in.