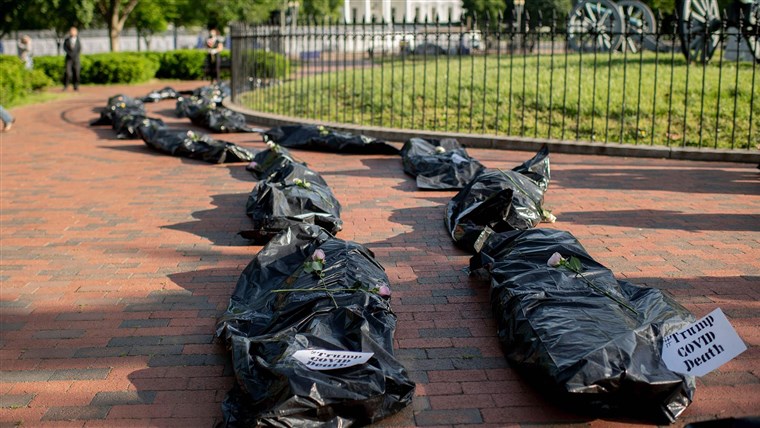 When the pandemic began last year, before it had really affected the US at all, I remember being devastated when I heard that 400 Italians had died in a single day. It was a massive number, far exceeding the death tolls of most mass shootings, terrorist attacks or plane crashes. It was so far beyond “normal” for 400 people to die of one cause in one country. It was shocking. Almost unfathomable.

On January 5th, 3,700 Americans died from COVID-19 – nearly ten times the number of that devastating day in Italy. That is the equivalent of the full population of 7 high schools being wiped out in a day. It is over 700 more deaths than the losses of September 11th. It is 1000 more than American deaths at Normandy on D-Day. We are the only country in the world with over 200,000 deaths and we go well beyond that number with 350,000 Americans dead already.

400,000 Americans were killed in World War II, and we are on pace now to lose more people in a single year to this virus than we did in that entire war. But the enormity of this is lost on so many of us.

We have failed. Unlike some generations before us who risked life and limb to overcome existential threats, this generation did not answer the call. We were asked to stay home, limit trips out, avoid gatherings, wash our hands and wear a mask when out in public. Simple instructions that could have saved tens or hundreds of thousands of lives, but fell on too many indignant ears.

This may seem harsh, but it is undeniable. Americans across the country have pretended this crisis didn’t exist. They refused to wear a mask – as if not doing so were some badge of honor. Many Americans attacked and disparaged world-renowned doctors who did everything they could to prepare us, and warned us that death-en-masse was a possibility. And far too many of us have died of COVID, realizing only when their death was imminent that the disease they refused to believe existed was going to kill them.

So many have tried to act responsibly through this, and yet, this pandemic is America’s greatest failure. We are desensitized to death, not only when we see it in the media, but also, it seems, when it comes to saving the lives of those around us. Our selfishness and lack of discipline to give up any level of convenience has taken center-stage. The need to go eat in a different building than our own home, to gather in crowds at concerts or parties, to spend time in small indoor spaces with strangers – all have outweighed the value we place on the lives of our families and friends. No amount of self-denial will change that fact.

Americans decided to risk the lives of their family members by gathering on Thanksgiving and Christmas and New Year, well knowing that those they were celebrating with could be dead within weeks as a result. It is gross negligence. And our healthcare workers who have risked their lives for a year to try and treat these people have been placed in further danger as a result of our collective carelessness.

This is not to say everyone who has become infected or transmitted the virus is completely at fault. Our essential workers were given no choice but to be exposed to hundreds of people a day. Our broken wage system forced people to go into work because those people would not be able to afford rent or food if they didn’t go. And some people who took all precaution – limiting time out, avoiding gatherings, wearing a mask in public – some of those people became infected despite doing everything they could.

But besides the cases noted above, there are no excuses. Being asymptomatic is not an excuse. We have known since the beginning we could spread the disease without knowing it. Seeing family is important, but not as important as making sure those people survive this. Going out to eat is not important. At all. We can support those restaurants with take-out and curbside pickup orders. We do not need to be sitting in them (or just outside of them). And we certainly didn’t need fans at NFL games, or people tightly packed into arenas for Trump rallies.

The saddest and most frustrating thing though, outside of the thousands of lives lost this past year, is how many chances we had to make things right. We did not foresee the New York outbreak last March. But it was more or less isolated in its severity and the rest of the country could have taken action. But many states did not lockdown or mandate masks until late summer or fall.

When hospital capacity reached its maximum and freezer trucks were called to hospitals to store corpses, we had an opportunity to recognize issues in the supply chain and create a national plan to make sure we had enough equipment, beds, and other vital resources to make sure we were ready for additional waves.

When we saw a spike in cases after Memorial Day, we had real evidence that gathering on holidays was perhaps the most dangerous thing we could do, yet holidays seem to remain one of the largest incidents of spread and unnecessary death.

When schools restarted in September and we saw a second wave, we had an opportunity to lock back down, understanding that crowds and groups were a bad combination when cooling weather was upon us and we were forced inside.

When experts warned us in April and May that COVID would explode with a vengeance come the fall if we did not get it under control, we had a defined timetable in which to act to make sure that when the cool weather came, we would not already be inundated.

We heeded far too few of the warnings. In many of the cases above, state governments provided valuable information and even some federal agencies made clear(ish) what we, the American citizens, had to do to make sure we kept numbers low and people safe. The information was all there. The evidence was there. And we had multiple real-time demonstrations of what this virus could do, and chose not to learn from them.

There are a lot of reasons we failed this test as a nation. There was conflicting guidance from the government. We had a President who was delusional and chose to downplay the virus in order to keep his Presidential campaign afloat. We had federal agencies limited in what guidance they could provide. We had legions of online trolls creating conspiracies and fearmongering about loss of rights. And yet, we still had all the information we needed. And the real-time consequences that played out before us was the validation we needed in order to act more responsibly.

And that is why, ultimately, the onus of this failure is on the American people. It is us, not the government, not Dr. Fauci, not bad supply chains, that are spreading this virus through inaction. Better guidance may have inspired more confidence, and supply chains may have saved lives for those already infected. But we all had the information, we all saw the consequences and we still collectively chose to live our lives in a way that was more conducive to the spread than not. The simple fact that we lead the world in cases and in deaths, even when proportion of population is considered, is the sole metric needed to etch our failure in stone.

And many people did everything right. They did everything they could to try to stop the infection and death. And this is not a small group of people. In fact, a majority of Americans probably make an earnest effort to contain COVID.

The problem is that limiting the spread of infection needs buy-in from everyone. It was made clear from the start that it doesn’t really matter if you or I choose to wear a mask if other people do not. Without an overwhelming majority of Americans doing everything they can to prevent spread, our efforts will fail. It is just that simple. And it is this idea that is seemingly lost on so many people. The phrase “The mask isn’t to protect you, it is to protect everyone else from you,” never seemed to land with a certain contingent of Americans. And that’s a huge part of why over 350,000 of us are dead.

We have a lifestyle issue in this nation. We have entitlement issues in this nation. Not an entitlement to wealth or luxury or class (though those are issues in their own right) but to the entitlement of placing oneself above the welfare of all others, even if that means literally killing the people around us. This leads to the major accountability issue we have because those same entitled individuals will vehemently deny any responsibility when one of their friends, family members, or coworkers dies as a result of their negligence. They believe they have a right to do whatever they want, and they believe that they should not be responsible for the consequences of exercising those rights. Because in doing so, they would have to admit that sometimes, just sometimes, it makes more moral sense to inconvenience personal freedom if it means the betterment and safety of our families and communities.

And that concept is so terrifying to some of us that we are willing to cling to it even if it means that 4,000 Americans have to die every day for us to retain it.

After all, there is a price to freedom.