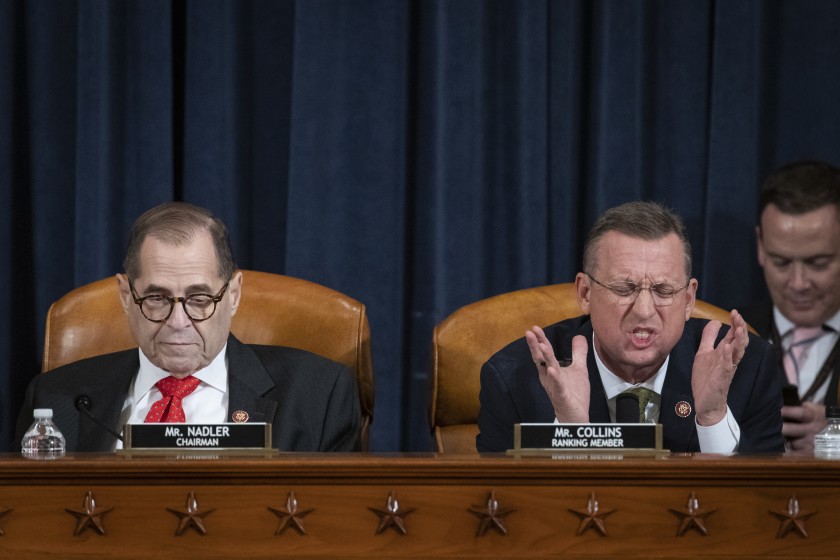 For weeks now we have watched hearings in the House of Representatives. Witnesses were called before the Intel Committee. Constitutional lawyers stood before the Judiciary committee, arguing why, or why not, the Constitution would support the impeachment of the President. We saw witnesses lay out a case for impeachment and a defense against. And now we watch as the House debates impeachment prior to a vote.

What troubles me only slightly less than what the President is alleged to have done is the conduct of the Republicans in the House. But let me lay out some context.

First, I want to make some concessions. Yes, it’s true, many Democrats have wanted the removal of President Trump from day one. Before he was ever elected, there was enough circumstantial information to suggest that Russia had not only interfered in our election, but done so with help from within the Trump campaign, that an investigation was warranted. He had made crude and sexist comments in his campaign, vilified immigrants, belittled the handicapped, dishonored a gold-star family, and publicly invited Russia to help him in his campaign. I don’t think there’s any debate that his behavior is repugnant. Simply, many Americans despise that behavior, and other Americans embrace it. But this behavior doesn’t necessarily warrant impeachment. Those early calls for removal from office were preemptive and generally baseless. Investigations had not concluded. It was emotion and frustration coming from a handful of House representatives.

However, this behavior has set up a “boy who cried wolf” situation, and that is on the Democrats. We’ve seen the torrent of terrible tweets and irresponsible behavior, and there was outcry. We heard “collusion,” and there was outcry (and not unjustifiably so). We had the Mueller Report, which verified Russian interference, and further, laid out a minimum of ten instances that the President obstructed justice. And then it was over, no collusion.

And now it isn’t.

Except this time, the evidence is there. We have a call transcript, we have testimony from 12 witnesses, and it all corroborates. There is very little discrepancy in the testimony of these witnesses, and in a court of law, that evidence would certainly stand. But the Democrats had “cried wolf.” And this is now the leading argument against impeachment. “We won’t impeach the President because Democrats have wanted to impeach since day one,” they argue. But here’s the thing. The last time the boy cried wolf, the wolf was really there. The threat was real. And in a similar fashion, the wolf has arrived here too. The President has committed impeachable offenses. Does the “cried wolf” defense really excuse Republicans from treating seriously an event that violates the very fabric of the Constitution?

Let me lay out some context.

President Trump made a call to the President of Ukraine. In that call he asked President Zelensky to investigate Trump’s political rival, Joe Biden, and the timing and context in which he did so makes it 100% clear that it was for political ammo.

We then learned through testimony that it wasn’t just the call. Funds were also being withheld from Ukraine, and testimony corroborated that those funds, as well as a White House meeting, were contingent upon the announcement by President Zelensky, publicly on US television, that he would be investigating Joe Biden.

And further, this was not a one-time event. There was a team, headed by Rudy Giuliani, that worked to remove US public servants so that an investigation into the Biden’s could become more likely.

That’s the short version. I would imagine that no matter your opinion, when you see 12 witnesses all tell very similar stories, when you read a call transcript that shows the request was made, it is clear that something inappropriate, at a minimum, occurred.

Fifty percent of Americans believe Donald Trump should be impeached and removed from office. So it is clear American citizens are taking this seriously. That is the highest support for removal from office in our nation’s history.

So why is it that all we hear from Republicans is “Sham impeachment.” “No facts,” “Not impeachable,” “All hearsay,” “Circus,” “It’s not bipartisan,” “It’s divisive.”

Quite honestly, this behavior scares me.

It is no secret that this nation is extremely divided. The election in 2016 clearly showed that, as does our discourse since. But one would hope that when faced with a situation like this one, with a mountain of evidence that should at least be taken seriously, that both parties would stop playing politics and focus on defending our nation against foreign interference.

I don’t think our founding fathers could have anticipated a situation in which an entire party would be willing to stand in solidarity against the evidence before them. And yet, despite the clear danger that Trump’s alleged behavior poses, that is what they are doing. Worse, they have made light of it, and in doing so, have enabled many Americans to take up the call of “sham impeachment!”

Let’s be clear about what is being downplayed or outright ignored, even though there is direct evidence (the transcript) that:

The President of the United States asked the leader of a foreign nation to investigate a political rival for his own political gain.

As I’ve stated before, you don’t need a quid pro quo – that just makes the situation that much more dire.

We cannot afford to play politics here. Either side. Democrats should appeal to the courts. John Bolton, Mick Mulvaney, Mike Pompeo and even the President, should be forced to testify before the American people. It is not a step I believe should be skipped. This is impeachment. Proximity to election should not matter to either party.

But not going to the courts is nowhere near as egregious nor as much a betrayal of our nation as is the Republican’s behavior in this process. In fear of political backlash, they would rather see our Constitution violated than stand to protect it. They support a White House that will not provide documents and will not allow witnesses to testify before the American people. They support the obstruction of the very House of Representatives in which they serve. And they do so without providing any exculpatory evidence, they do so without contesting any of the testimony provided, and they do so without calling for testimony of witnesses who could purportedly “clear” the President.

This is a partisan impeachment, but it shouldn’t be. It is a sad moment for American when Republicans choose party over the safety, security and the Constitution of the United States.